William Strickland was born in March, 1849. When in his teens he acquired a great liking for the game of draughts. In a few years he made the acquaintance of some of the leading Yorkshire experts, and, having secured a copy of that rare draughts classic “The Draughts Board” he set to study the game from the scientific side, and his progress was rapid. In 1871 he played his first match with a Leeds expert, and, although he allowed his opponents three games of a start in six, Strickland won all the games, played in the match. He suffered defeat by J. Birkenshaw in 1878 by 3 win to 2 losses with 5 drawn in Leeds for a purse of 10 Pound. His record of won matches was a good one, and amongst others he defeated Robert Martins, ex-world’s champion, and the late James Smith, then champion of England. Strickland experienced a defeat at the hands of James “Herd Laddie” Wyllie, Bryden of Glasgow. The famed J. Birkenshaw, Willie Gardner, and others also lowered Strickland’s colors.

His fame as a seeing player was eclipsed by his reputation as a blindfold expert. In his early days blindfold draughts was held to be impossible. Such players as Wyllie and Martins declared it to be all trickery. Phillidor, a great blindfold chess player, tried to play draughts the same way, but failed. Drummond, the great Scotch expert and author, “maintained that draughts required both
sight and thoughtful mind.” But Frank Dunne, of Leeds, attempted blindfold play, and succeeded. His success fired Strickland’s ambition, and he was soon found playing blindfold with great ardor.

He did give a simultaneous competition in 1881 playing simultaneous 20 games of blindfold in Leeds scoring 7 wins to 6 losses with 7 drawn. In 1884 Strickland made a tour through thirty towns in England and Scotland, and met with hearty and enthusiastic receptions. In 1884 a Mr. Goodall vs Strickland in Leeds took place with Mr. Goodall having the upper hand. The local papers gave full and interesting reports of his exhibitions, the highest terms of praise; especially alluding to his wonderful power of memory in repeating both forward and backward the movements of the games played. During one series of 29 blindfold exhibitions, making a total of 193 games, Strickland won 122, lost 19 only, and 42 were drawn. He also played an immense number of cross-board games, winning the great majority of them. These exhibitions were of the most brilliant description, and called forth laudatory notices from the press.

Strickland was a part of the English team facing the Scottish in their 1884 International Match along side players like William Gardner, James Smith, J. A. Kear against the mighty Scottish with players like Robert Martins and James Ferrie. His score in the match was 1 win and 1 loss to 16 draws which was a tied best performance for the English team alongside Andrew Jackson (16 draws). In 1885 James “Herd Laddie” Wyllie faced off with Strickland in Leeds the score being 3 wins 2 losses and 15 draws in Wyllie’s favor. The same year a subscription match Strickland vs Willie Gardner in Leeds was held resulting in a tie 2 wins each and 16 draws. He as well played 10 simultaneous blindfold games, held at South Stockton and repeats all the moves backward and forward by then his signature feat. In 1886 a second match against Willie Gardner at Leeds for a stake of 250$ was won by Gardner 4 wins to 2 losses and 37 draws.

The next year he contracted a cold, which became of a chronic bronchial nature, and in October, 1887, aged just 38, the draughts world was startled to hear of the death of this remarkable and versatile genius, whose quaint wit and kindly nature won for him an immense circle of fast friends all the world over.

Stricklands Famous Problem. While there are several solutions to this problem. I did stick with a common one.

“One who knew him expressed some astonishment that one so rough and unintellectual in appearance could perform his known feats, but I prefer to say he was an outstanding example of how far real mental force can carry a man in a purely intellectual activity. He was a noticeable figure. Upon a body somewhat incommensurate, appeared the face of a fist-battered pugilist, surmounted by a shock of standup hair. His very assertive disposition was accompanied by some acuteness of mind. His quickness at making a point probably developed in that business training which went far to cause his early demise of bronchitis – he was by way of a ‘cheapjack’ in crockeryware. But whatever his repellences, roughness’s or defects, charity reminds us that for over a decade he had no superior as a propagandist, touring the country in play, and attracting the public with his blindfold displays. For the rest, one adds that his famous position will keep his memory green: while on the literary side he was the initiator of the B.D.P. “

Remarked by Liam Stephens: The above occupation suggests to me that he was involved in the manufacture of pottery. According to Wikipedia, the manufacturing hazards involved included Silicates or Sulfur compounds contained in the clays used.

A game by Strickland:

Strickland in the News: 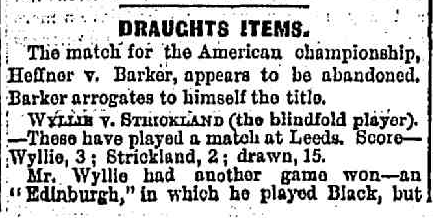 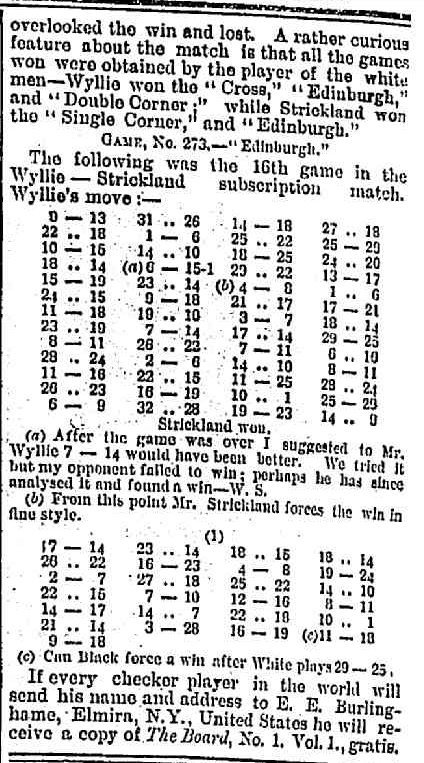 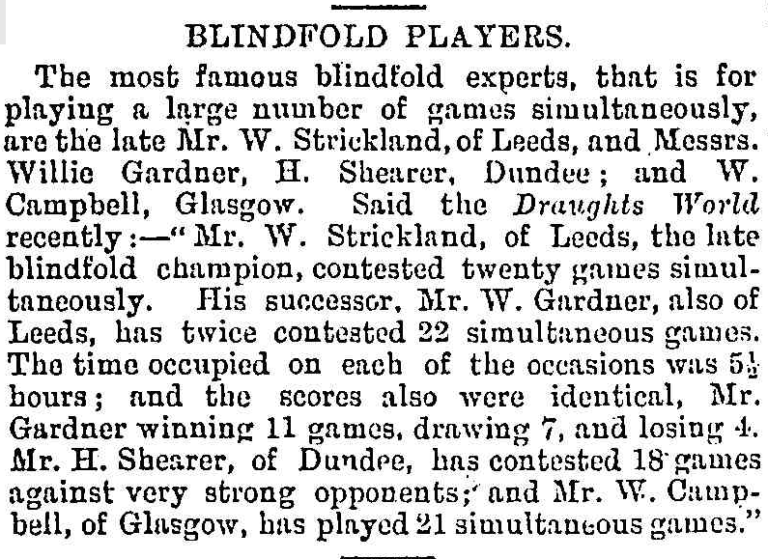 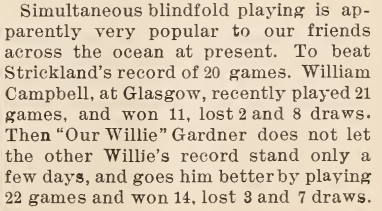 Remark by Dennis Pawlek: I am a firm believer that given the description of Mr. J. Alexander and the surviving portrait picture that he had dwarfism. Yet no other newspaper or article is descriptive seems to mention the fact.