Robert Fraser was born on the 4th of August 1871 and started to join the Dundee Draughts Association in 1888. He did quick make rapid progress that in 1889 he did participate in the Dundee Championship. He did defeat Mr. W. Whyte a well-known Dundee player 2 wins to 1 loss and 8 draws. He missed winning the championship final being defeated by Mr. W. Taylor 3 wins to 2 losses and with 1 drawn.

In 1890 the champion W. Taylor did not enter the tournament and Robert Fraser won the Dundee championship. He defeated H. Shearer in the semi-final by 2 games to 1 and 3 drawn. Facing R. Wishart in the final 4 games to 2. He did as well manage to win the club’s subscription medal the same year without losing a single game.

1891 did prove to not be his year facing H. Shearer in an early stage of the tournament and being eliminated with H. Shearer winning the event.

In 1892 he did manage to win the event again facing H. Shearer in the semi-final and besting A. Shearer in the final each 2 wins to 1 and 3 drawn. His total score in the tournament was 11 wins, 2 losses, and 9 drawn.

With James Wyllie, he scored 0 wins, 1 loss, and 1 draw. He did defeat W. Cambell a famous blindfold player of the time 6 wins to 1 loss and 1 draw.
In 1892 he was reported to have a private sitting with Robert Stewart defeating him 2 games with Stewart not getting a draw.

Spurred on by this in November 1892 he played Richard Jordan for 20 Pound aside in a losing effort 6 losses 2 wins and 9 drawn. – You can see a full report in the news at the bottom –

Robert Fraser is said to have a good score with Robert Martins 2 wins and 9 losses with 2 drawn. In a sitting with J. Searight, he managed to hold his own 1 win each and 1 drawn.

In 1894 he entered the Scottish National Draughts Championship. He was drawn against Robert Stewart suffering defeat and elimination in the first round 2 losses to 2 drawn.

He is said to have been an assistant spirit dealer (barman) but later is listed as an sheriff officer.

After the passing of James “Herd Laddie” Wyllie in 1899, the reporting on local draughts events in the local newspaper dies down so not much is known about Fraser. Yet a mention can be found that suggests he was as well involved with one of the local football club and one would think that he tried to defend the cities championship and did enjoy family life.

In 1906 his tragic death is reported at age 35. He did drown under unknown circumstances after leaving his wife and family of four in the early morning hours. It is reported he went for a walk of whom he never returned. He was found floating on the Mouth of Tay along with Debris of the Seagate fire.

A game of Robert Fraser:

While playing Fraser is described as cool and cautious, the result of every move being carefully calculated before it is made.

Robert Fraser in the news: 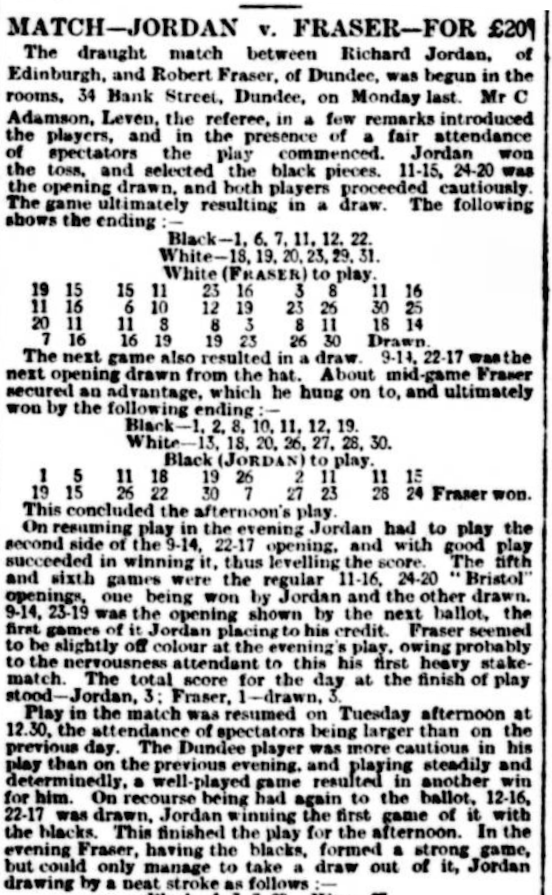 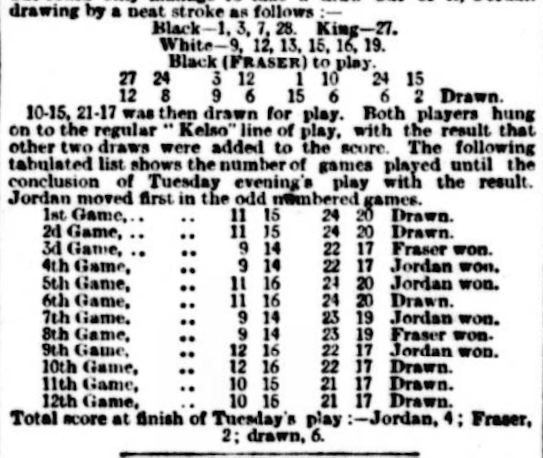 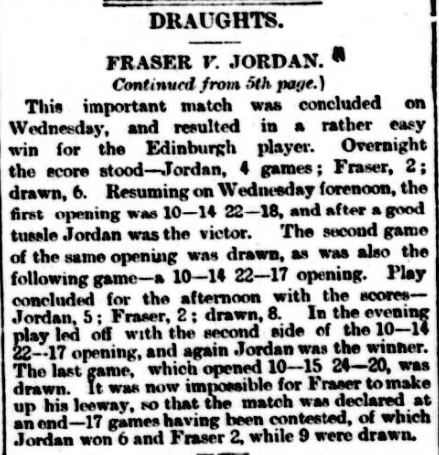 Remark: Thank you to Jason Yeo and Frank Moran to help me with some of the research and the Scottish National 1894 picture. When doing the research there is another Robert Frazer from the Glasgow area which was a member of 1894 Scottish Team in their match against the English. He is commonly found with z but the spelling in the newspapers and magazines is at times inconsistent.