In the family tradition (from 1915) he is the third generation playing draughts in a club, national competition and tournaments.

His entire life he is amazed at the apparent simplicity of the game. However, one can play 10,000 games and they are all different, as strategy and complex combinations go together, whereas the obligation to take guarantees a great depth.

A great interest in archaeology led to inquries into the history of draughts. He wrote his first articles in 1975 during his compulsory military service. Wrote and articles and did research for the draughts journal “Het Nieuwe Damspel) (1976-1992), a journal that emphasized solitary draughts. Has since 1982 a column in “Het Damspiel”, the magazine of the Dutch Federation.

China invited him at the First World Mind Sport Games (Beijing 2008), asking him to give presentations about the history of draughts.

As a member of the International Bord Games Studies Association since 2011 he gives presentations at universities symposiums all over Europe. Together wwith the Itlaian team Centrao Studi Triplice Cinta he searches for ancient inscriptions of the alquerque board.

His most important contribution however is his collection of picture on draughts in art; the present number is 2,900. The visual image affirms the result of historical research; more and more the imp0otant position of draughts in the cultural evolution of Europe is coming to the surface.

Study Dutch Language and Literature in Rottderdam (1965-1973) and Leiden (1984-1985). Doctoral research Leiden (1985-1997). Title dissertation (translated): “About the origin of the Dutch game name damspel” (1997). The starting point of the investigati0on was the question: “What is the etymology of the French game name jeu de dames = ‘draughts’? The road to the answer was a historical analysis of words for the board game draughts, chess, tables and morris in especially Dutch, French, German, Italian, Spanish and Latin. The answer was: “The French game name dames is a new meaning of the medieval French word dam, which meant ‘dam, dike to stop the water”. This thesis pus continued linguistic research are the basis of research into the history of the four mentioned board games.

…born in Amsterdam, started playing draughts when he was nine years old. He is a member of a draughts club too (since 1979) and like van Mourik a participant in the Dutch national competition and in tournaments. Debates on the history of draughts in Dutch draughts journals, with persons taking part as Gerhard Bakker, Wendel Kruijswijk, Wim van Mourik and Arie van der Stoep, arouse his interest in the history of the game, discussions also fed by the discovery of a number of dated and undated old boards which combined draughts and morris. In 1998 he started to dig into Dutch archives on the occasion of the preparation of a book for the 50th anniversary of a draughts club in a region called the Zaanstreek, just north of Amsterdam. The club was founded in the 20th c. However, several 19th c. boards from this region were maintained, how did draughts players live, work and play in those days? He decided to extend his inquiries to the 19th c. He discovered a lot of new information, new recorded and therefore unpublished, such as unknown tournament wins of the famous and legendary Aris de Heer during the period 1835/1839. At the same time he gathered a lot of information about chess in this age. All his discoveries about the game in the northern part of Holland -books, players, tournaments, clubs and draughts columns in newspapers and magazines- can be consulted on the website http://draughtshistory.hoofdlijn.nl.

There are 4 more pages but for space reasons. Here is the first one. 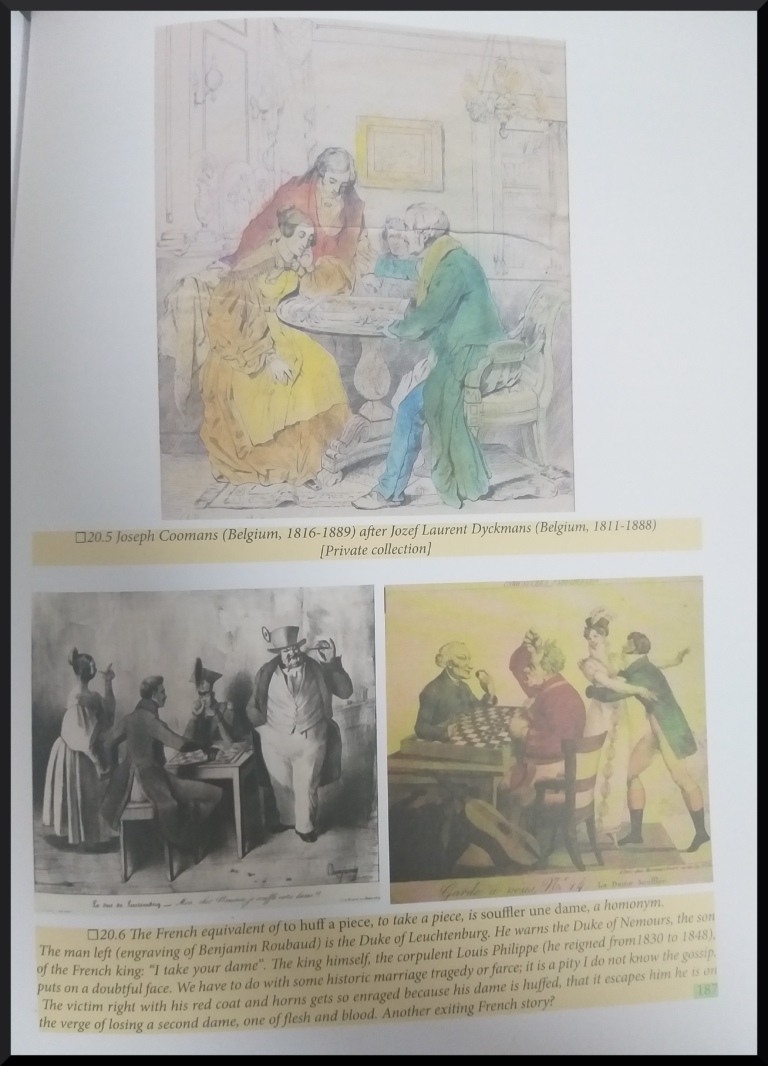 The book is in English and Dutch and contains 375 full-color illustrations and other very useful information on the history of all three games! It’s a rich source of pictures containing game sets or tables and stories from Marie Antoinette, Jean-Jacques Rousseau, and many more.

If you are looking for play then it is not the book for you. I would recommend for every Draughts, Chess, and Morrison lover and a lover of just general arty books that someone put a lot of love and heart blood into.

A great addition for one’s draughts and chess library as it offers something different. This book offers a real treasure of pictures and stories. A good table and discussion piece as well.

You can place an order at

The book is self published and described as

In 2019 we published our book: An iconography of draughts. In the meantime we spent almost 2 years on a new book: Chess, draughts, morris & tables. Position in Past & Present. Bilingual again, hard cover, format: 26,5×20×3,2 cm, 369 pages, 375 full colour illustrations (out of my collection of 5.000 images of the four games), 1563 grams and a solid justification in terms of bibliography, account illustrations, index of names, appendix, etc.