Charles Francis Barker, ex-champion of America, was born in Boston, March 11, 1858. He began playing draughts when in his youth. He soon acquired a keen conception of the mysteries of the game, and displayed a marked ability in play that he rapidly rose to distinction among the local players. But when 15, he met the famous “Herd Laddie”, then champion of the world, making the creditable score of 3 games won, 10 lost, and 12 drawn. He afterward met most of the leading players of America, one of his most noted early matches being that with David Kirkwood, of Boston, formerly a leading UK player; this match ended in a tie, each player securing 2 wins, and 21 games being drawn. Barker next tried his skills with the late W. H. Broughton, of Portland, Me, this match also resulted in a tie.

In 1878, there was much controversy in the papers concerning the championship of America, several players claiming the title. A match was arranged between Barker and M. C. Priest, one of the claimants, to determine the title. Great interest was generated in the match, which was played in Boston, and resulted in a decisive victory for Barker, the score at the conclusion being 9 wins and 2 losses, and 32 games drawn. About 1880 Barker suffered defeat at the hands of J. Moir, the well-known Scottish player, who was then on a visit to the United States. Score: Moir 1, Barker 0, drawn 16 games. No stakes, however, depended on the result.

In March 1881, he played a match of 50 games in Boston with J. P. Reed, jr., for $200 aside and the championship of America, and won by the score of 4 to 1. In December of the same year, he again beat Heed by the same score. In the summer of 1882, he challenged James Wyllie, the celebrated “Herd Laddie,” to play a match for $100 and the championship of the world. The challenge was accepted, and Barker surprised the majority of players by making a draw of the match, in a contest of two weeks’ duration, the final score being,—Barker 1, Wyllie 1, drawn 48. This match sparked quite a bit of controversy as in this match there were a total of 31 Glasgows played with many mainly being repetitions. It was believed that Barker was playing under order to not lose if he cant win. James “Herd Laddie” Wyllie was reportedly sick at the time and happy to not have it end in disaster.

In a match played at Philadelphia in January 1885, Barker again defeated Priest by the score of 3 to 1, and 45 games were drawn, In the same year, he was defeated in a match for the American championship by C. H. Freeman of Providence, R. I., who is not only a first-rate checker player but was also one of the few native Indians still left in the eastern states. Freeman soon lost the championship to A. J. Heffner, who was speedily challenged by Barker. The match was played at Providence in January 1886, resulting in a victory for Barker with a score of 2 wins to 1 loss, and 47 games drawn. Barker held the championship in undisputed possession till October 1887, when he was again challenged by Reed, who once more came off second best, and finished a point worse than in both of his two previous efforts, the score being, Barker 5 wins, Reed 1 win and drawn 41. In the latter part of the same year, a match was made with Robert Martins, the veteran ex-champion of the World, for a stake of £200. The match commenced in Glasgow on Dec. 26, 1887, and finished on Jan. 10, 1888, the score being, Barker 3, Martins 1, 45 drawn.

In 1888 Barker again visited Europe, satisfactory arrangements having been made for a much-talked match with James Smith, the English champion. This match was for a stake of £200 and a silver cup. Barker was again victorious, the score being,—Barker 5, Smith 1, drawn 23.

Barker had no sooner returned home than Reed again grabbed his attention, and on June 3, 1889, the fourth match for the American championship between these contestants had begun. The match consisted of 50 games, restricted, for a stake of $400, this being the amount staked in all of Barker’s matches for the championship, with the exception of the one with James “Herd Laddie” Wyllie. During the first week. Reed won five games to Barker’s none, but after that Barker gradually gained until the 50th game, when the score stood,—Reed 8, Barker 7, drawn 34. Barker, however, lost the last game and the championship. All in all Reed and Barker played 5 matches during their lifetime. All were won by Barker but the 4th encounter. The last one won by Barker in 1892 with a score of 5 wins to 23 draws and Barker regaining his American title.

In 1897 Harry Freedman played Barker while the latter operated an automaton. The result was 1 win each and 2 draws.

In 1900 he played Richard Jordan for the Championship of the World but the contest ended in a drawn score of 2 wins each and 36 draws which was held at Boston.

In 1905 Barker was called up to play in the First International match America against the United Kingdom. He scored the second-best individual score for the American team with 5 wins to 3 losses and 32 draws.

In 1907 he managed to cement his title as the Champion of America by winning the first American Tournament. He won the final round against Heffner who had the highest score for the US team in the 1905 tournament. When they squared off in the final the score was 1 win and 3 draws in favor of Barker.

In 1908 he defended his American Match Championship against James A. Drouillard 10 wins to 2 losses with 31 draws at Kansas City, KS.

For several years Barker edited a column in the Boston Globe. In addition to this, he did publish two books on the game “The World’s Checker Book,” and the “American Checker Player.”

He was also the controlling checkers genius of Ajeeb, the Automaton. He did so with the help of his brother Isaiah Barker. Charles did do the playing while his brother Isaiah took the money. Charles Francis Barker’s death was announced on the 5th July 1909 by his brother Isaiah Barker just two days after he operated on Ajeeb the last time. At the time of his death, Barker was 51. It was believed that his constitution was contaminated from being confined in such a small space over a considerate period of time.

Mr. Barker is a gentleman whose quiet, agreeable manners and uniform courtesy ensure him, friends, wherever he goes. As a match player, he enjoys a worldwide reputation, as being cool, calculating, and self-possessed, playing fully as well when a game behind as under more favorable conditions.

Barker in the News: 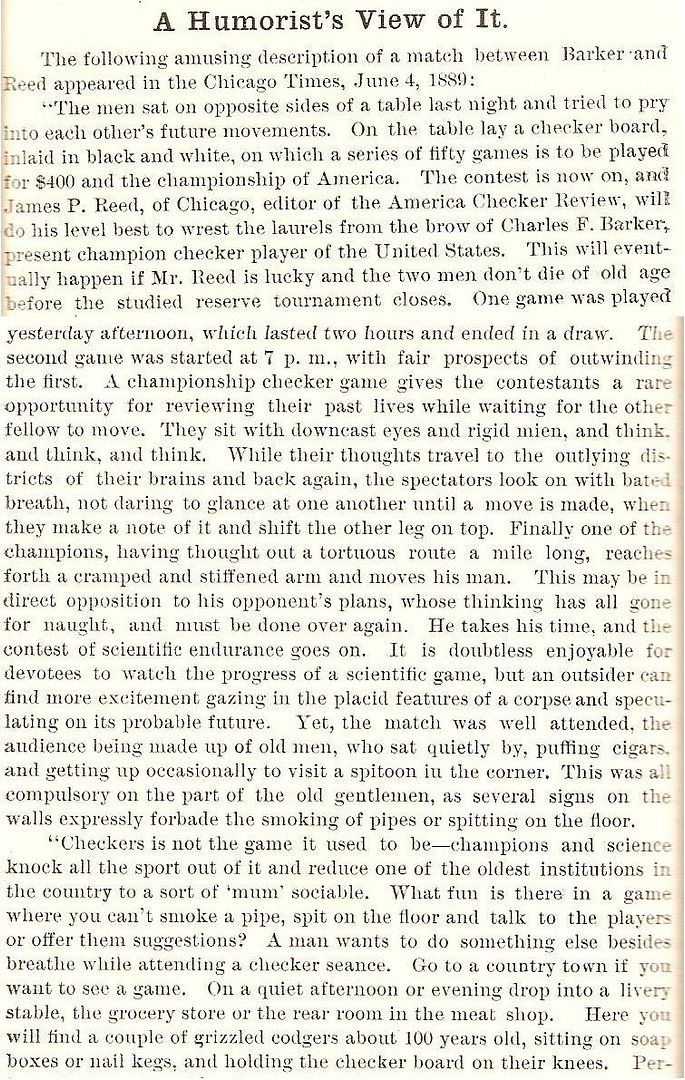 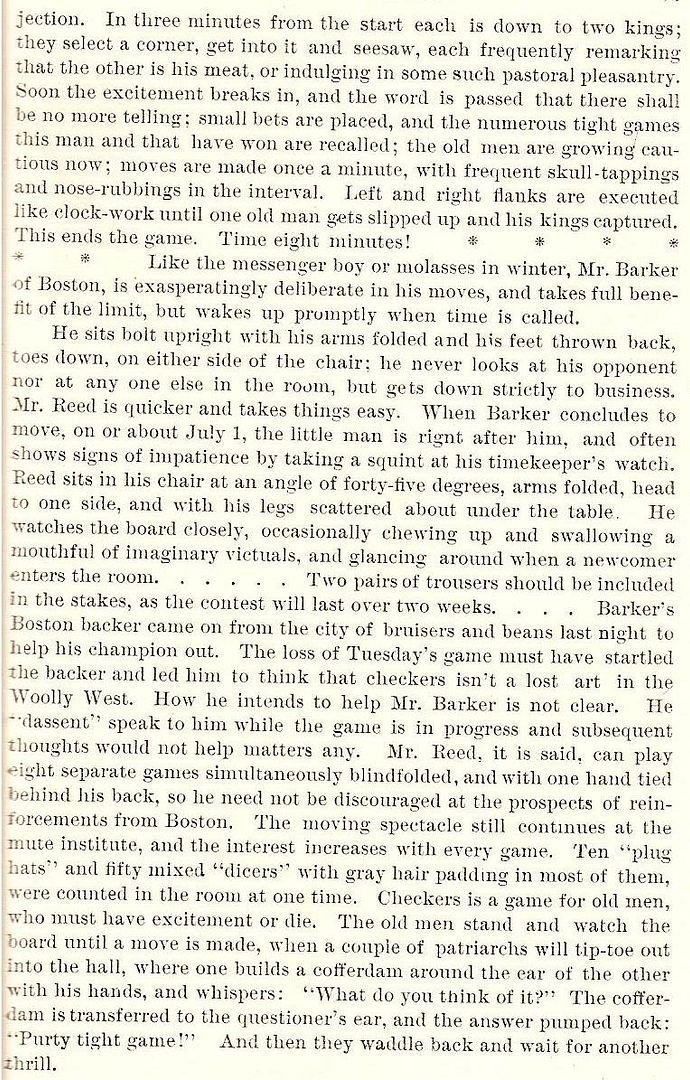 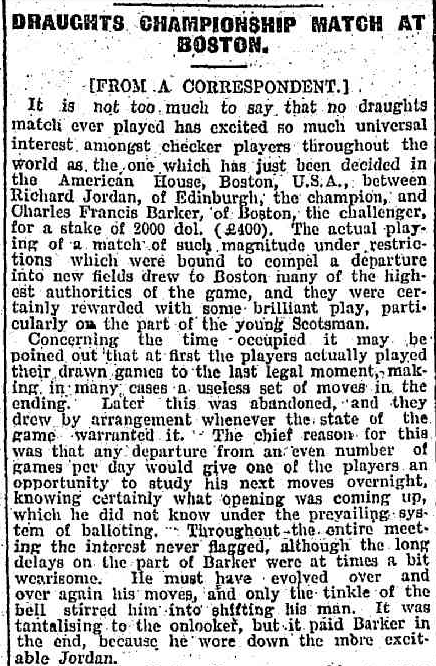 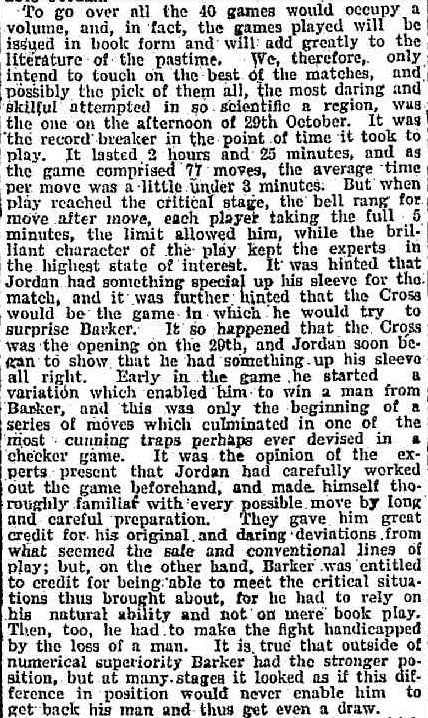 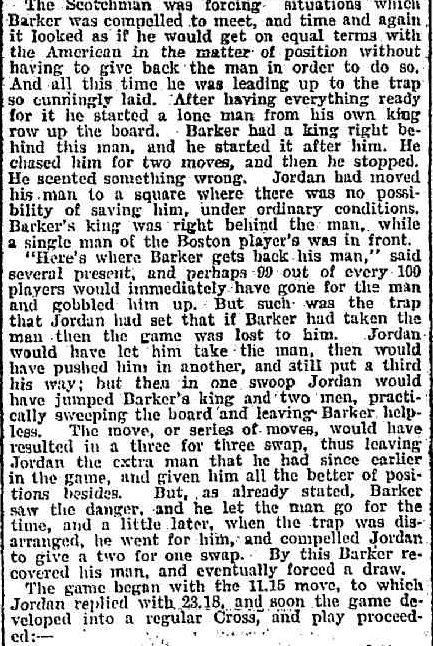 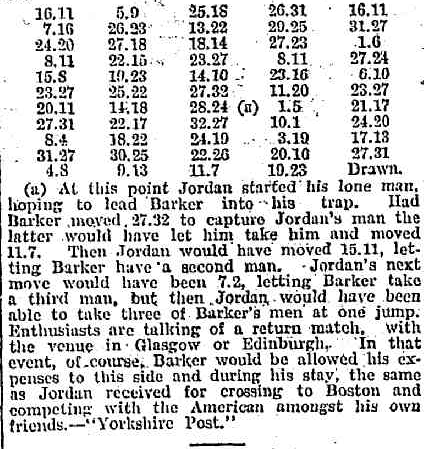 Remark: Charles Francis Barker did make a living playing so the matches in the article are by no means complete and focus on the most important ones in order to reflect on his life.