Robert Martins was born on Feb. 21, 1822, at Penryan, in the county of Cornwall, England. At an early age, he accompanied his parents to London, where he obtained his education, and where the first came into touch with the game of draughts. In his youth, he gravitated to music, and with his Violine, he was enabled to support himself by his practice and was as well involved in weaving and the clothing industry.

At the age of 21 when he paid more attention to playing draughts, his progress was rapid. In several minor matches, in which he was successful, he established a reputation and became recognized as one of the most accomplished players in his area.

A match was projected and arranged by J. Barber, who supported Martins in many of his subsequent contests, by Martins wresting the laurels from the Scottish champions. This match was played by Martins and Harper Colthard, at Newcastle-on-Tyne, March 19, 1849, the conditions being the first nine wins, for 30 Pound each. Colthard won nine wins to six losses and twenty-seven draws. In the preparation and during the progress of the encounter, Martins was attended by J. MacKerrow, and Colthard by the celebrated player and author, Andrew Anderson.

In 1863, Aug. 31, he contested another match with Wyllie at the Trades Hall, Glasgow, for £100 a side and the championship, fifty games, wins and draws to count; and, after playing thirteen days, the match resulted in all the games being drawn.
In his next contest, the tide of fortune turned. In a match commenced in the Trades Hall, Glasgow, Jan. 18, 1864, and lasting three weeks, for £100 a side and the championship, sixty-two games wins and draws to count, Wyllie won ten, Martins five, and forty-seven drawn. Shortly after his match, he married and settled in Douglas, Lanarkshire County, Scotland. He did have at least five children with his wife Lucie.

Again he tried conclusions with Wyllie, in a contest which took place in Leviathan Hall, Glasgow, commencing on Aug. 5 and ending on Sept. 13, 1867, for £100 and the championship, sixty-two games win and draw to count. This match resulted in each player winning seven games, and forty-six draws, when they mutually agreed to close the match, leaving two games unplayed.

Martin did assist in the creating of several publications on the game and 1849 Martins assisted in the publication of “Bonn’s Handbook of Games”. The same year he published the “Match Games of Colthard and Martins”, in 1859 the “MacKerrow and Martins Match Games”, and in 1864 the “Martins and Wyllie Match Games”.

In 1866 he issued a challenge to the checker players of America, but it met with no response. The desire to meet the players on this side of the ocean was still cherished by Martins, and during the year 1876, he was enabled to gratify it. He arrived in America on August 12, 1876, and soon after he issued a challenge to any player in the world, “particularly Mr. Wyllie.” This was accepted by Robert D. Yates who had previously defeated James Wyllie for the World Championship. The result of the match with Mr. Yates was, Yates three to Martins one, and forty-five draws. The succeeding fall and winter were spent by Martins in a tour through nearly all the cities of the West and South-west of the US. This closed Martins’ tour in America, he departed to Scotland on June 6, 1877.

Martins is famous for a line in the Glasgow opening which was used when he was tired of match play and needed a rest game. This line is called Martins Rest.

Another claim of James Wyllie and Martins did occur in their 1880 match in Glasgow. It is until this day called the “Switcher match”. No less than 20 Switcher games were played to proof a defense in the 29-25 switcher variation. Robert Martin believing it was a win but James Wyllie strongly disagreeing. The result was Wyllie 4 wins to Martins 1 win and 15 drawn. All wins with the dark pieces.

In the International Match, England vs. Scotland 1884, despite being English by birth, Martins was elected to play for the Scottish team. He did score 2 wins with no losses and 12 draws. The same year the record shows a defeat of a Mr. Adamson of Leven with 5 losses and 2 wins with 11 games drawn.

In 1887 while still being in the United Kingdom and before defeating James Smith in a match, Martins was challenged by C. F. Barker for 100 Pound each, with Barker having the upper hand 3 to 1 win and 45 drawn.

He was called up again to represent Scotland against England in the 1894 match and did score again 3 wins with no losses and 20 draws. Where he defeated some of the best English players like William Strickland and Willie Gardner.

In later years Martins was financially troubled as he had to devote most of his time to the care of his sick wife. The last match between him and his old foe James Wyllie was an effort to ease his financial burden. All in all Martins and Wyllie had a great rivalry over the board and with 22 games in favor of James “Herd Laddie” Wyllie and 19 for Robert Martins with 300 drawn. Robert Martins died on 27 July 1904 in Douglas, where he spent most of his life, then 84 years old.

A game by Robert Martins

Martins is said to have a certain “touchiness”. It is related to the great subscription match arranged by Glasgow players for the old veteran. When he overheard one of the spectators remarking that he got lucky to draw one of the games Martins remarked: “You have no right to say that, especially when you don’t know. Where the spectator replied a bit nettled: Well, I am only expressing my opinion, and as a subscriber, I suppose I am entitled to do so.” Martins answered: “Oh your a subscriber are you… then if it is so. I refuse to continue the match, till your subscription is returned to you! The subscription was returned, as Martins did not budge from the position he had taken.”

Martins in the News: 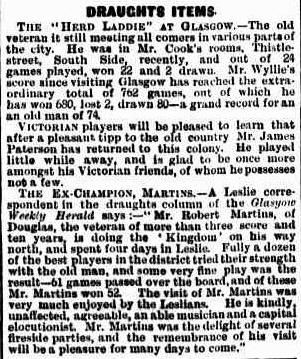 Robert Martin was described as being “Tall and pale-faced and long-headed. Well-read and thinker of some depth. Personality-wise he was considered courteous and cautious in expressing opinions on points of the game. He was said to be good with the Violine and an excellent speaker until in later years hard of hearing and dim in vision.”