James Smith was the first champion of England, he was born in Birmingham in February 1860 and in later life became a plumber by trade. At an early age he showed wonderful aptitude and skill at the game of draughts, and under the tuition of Jabez Grice, a well-known north-country player, while still in his teens, met and defeated every player of note in the north of England.

Smith was a member of the English International Team against Scotland in their match at Glasgow 1884. His record in the match was McInnes 4 draws, Moir 1 loss and 5 draws plus James Ferrie 1 win each and 3 draws. At the first English National Championship at the County Forum, Manchester, in 1885, Smith managed to win in the final against Andrew Jackson of Manchester and therefore the title of the Champion of England.

In 1886, in consequence of a challenge from Jackson to play a match for the Championship and a stake of £ 100, the same players met at Spennymoor, when Smith again showed his superiority, scoring three wins. Since then he has held uninterrupted possession of the honors of the championship.

In 1882 he assumed the editorship of the English Draughts Player magazine and has successfully edited the draughts column in the Northern Leader.

This turned out to be his late match and it appears the strain of the match was to such an extent that his health declined and soon passed away in February 1890 of paralysis aged just 30. He was survived by a widow and a family of four.

A game by James Smith:

James Smith was described as having a fine constitution, and a placid, equable temperament, which had enabled him to become a match player of the very first rank; while his quiet, gentlemanly demeanor and his pleasant, genial manners secure him, numerous friends, wherever he went.

James Smith in the news: 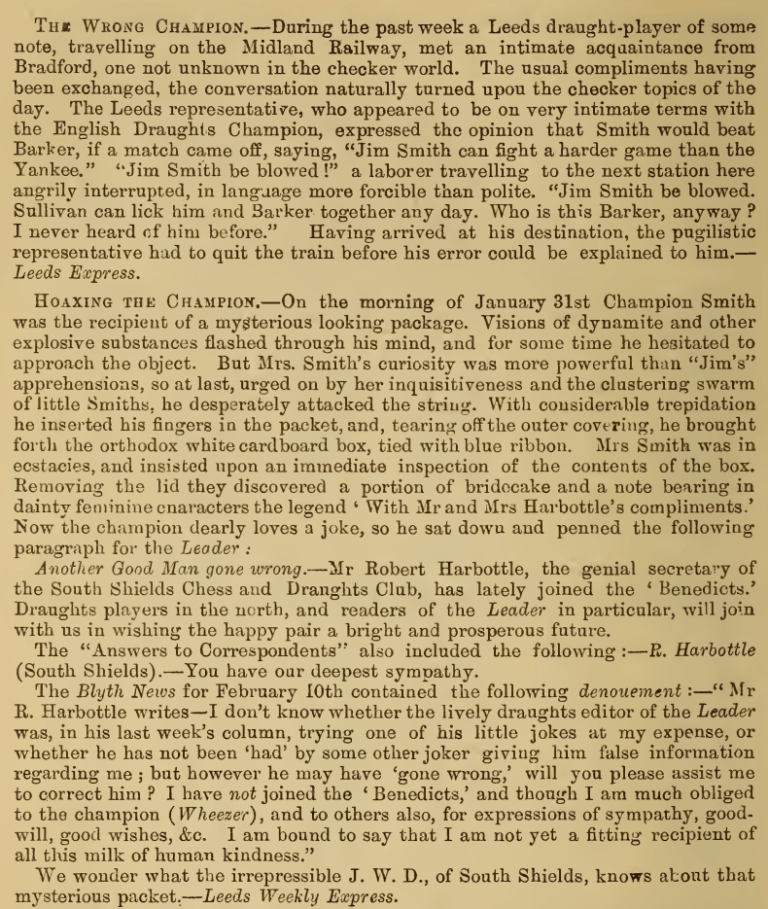 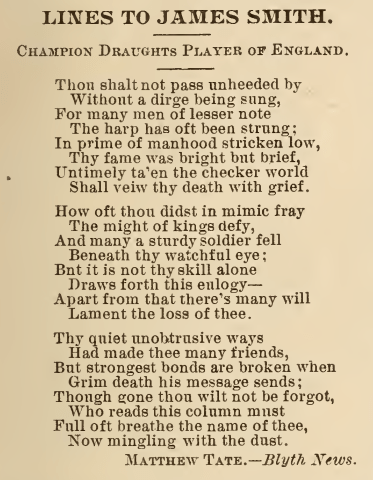