The Checkers Games of Richard Jordan

Who was Richard Jordan?

Jordan, a son of Irish parents, was born on 4 November 1872. In his early years, he did challenge the former world champion James Wyllie now over 70 years to a match which he did manage to win.

Enduring a setback at the Scottish tournament of 1893 where he lost to Robert Steward in the second round. He did recover quite well in the 1896 tournament winning it against James Ferrie who at the time was the current world champion by previously having defeated James Wyllie for the crown.

After his win of the Scottish tournament, he did play James Ferrie for the world title in a 40 game match and managed to win 4-3 with 33 draws.

His first challenger was by Robert Stewart, who had been Scottish champion from 1894 and 1895. He managed to defeat him by 4-2 and 33 draws.

Next in line was the American Champion Baker. With a drawn score 2-2 and 36 draws with Jordan retaining due to a draw clause.

Jordan became a professional player and went on tour, pitting his skill against all comers. In 1902, he defended his world crown again and defeated Harry Freedman by 7-1 with 21 draws. In 1903, he relinquished the world championship for business reasons.

Despite having stepped down from the world championship crown, he was part of the first International match against America where he scored an outstanding 13-0 and 27 draws. He did score the best individual result of all players.

Richard Jordan’s life ended tragically at the age of only 38. On 7 September 1911, he was knocked down in a street accident in Edinburgh and did not recover from his injuries.

The book misses an actual page index and list of opponents but has games grouped into openings near the end of the book. 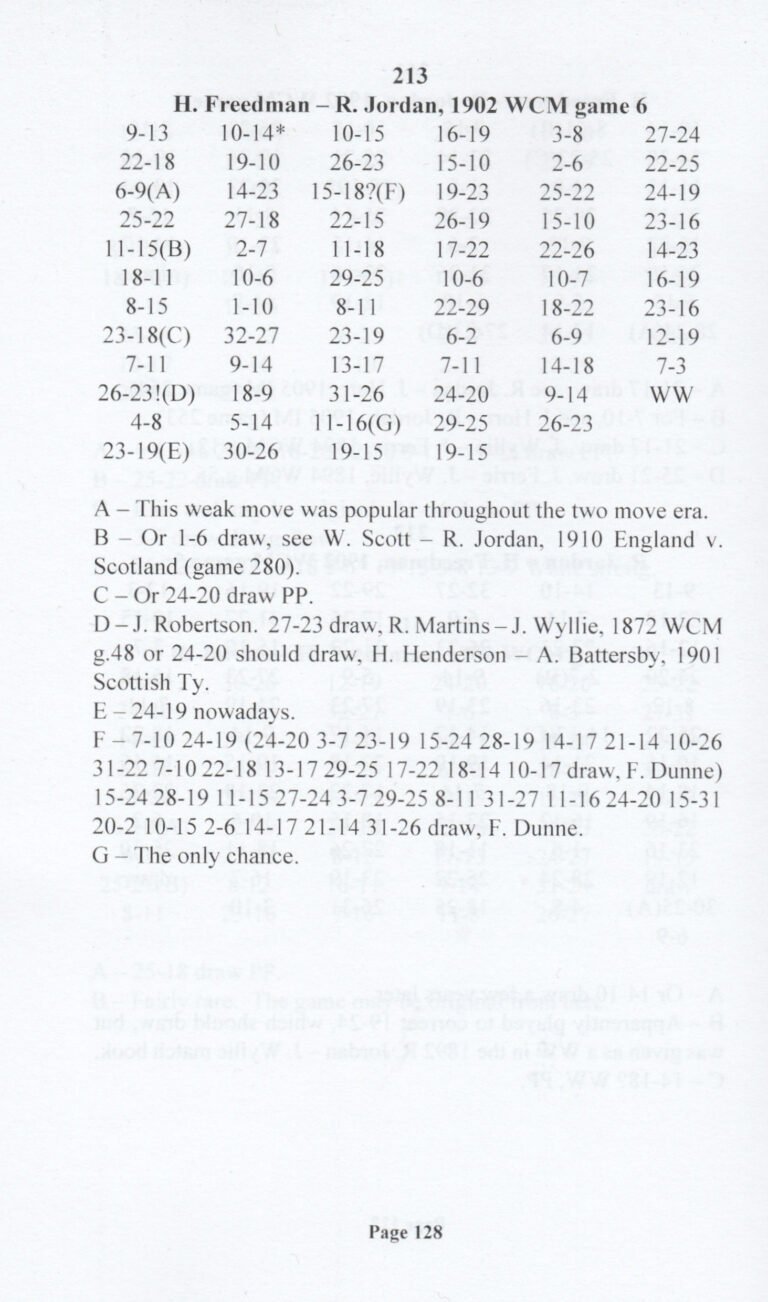 For all of you admirers of the history of the game or anybody who want to look at a player’s game close up in one space. Is it complete? No by no stretch as Richard Jordan played thousand of games. This book is the only one on the subject of Richard Jordan! A real must for collectors and lovers of the game.

It is a fine and short analysis of games that gives enough room for you to build up and make your own conclusions. Worth it for any draughts history lover, book collector, or admirer of good games.