The Complete Encyclopedia of Draughts Vol. 1

The Complete Encyclopedia of Draughts Vol. 1 – The Plan

Derek Oldbury, was born 21st March 1924 and had a birth defect which confined him to a wheel chair for the rest off his life. He was given only a few weeks to live but died at the age of 70, on 9th July 1994. He won his first major tournament in 1950 taking the Scottish Open age just 26. His tournament accolades are a great many but keep it brief it includes winning the British Open, Scottish Open, English Open and US Nationals.

All in all he competed in 7 world championship matches, winning in 1976 (GAYP) and 1991 (3-move). His greatest achievement was maybe to win a game of Marion Tinsley.

He authored several books and magazines including his 6-volume masterpiece ‘The Complete Encyclopedia of Draughts’.

Remark: There is much more to write about Derek Oldbury and much has been written but I think it warrants an extensive Biography in the Biography section at a later stage. For those who can’t wait there is a great piece about him at the Online Museum of Checkers by Slava Gorin. The above imagine is taken from there as well. 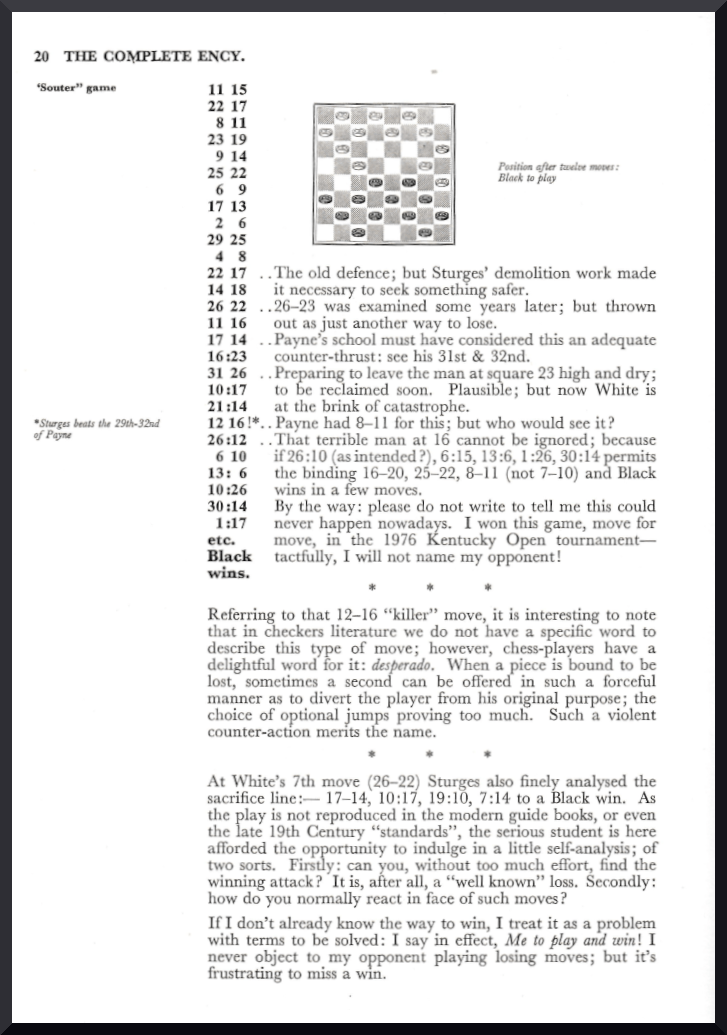 Everybody that looks for any kind of deep history and education in the game of draughts. The subjects of education might now be as wide as in other books but they are full of stories, anecdotes, and historic facts while going into great detail on some openings. Not for the mere beginner more geared towards advanced and expert players.

I do consider this the best book series ever written on draughts. Part 1 is my favorite draughts book of all time. While certainly in parts it is not easy to understand for the beginner. You would need to understand some of your draughts history to get all the points and pointers. If you do get into into this book, then it will show you it’s full of witty content and teaches you approaches on how to develop yourself in draughts.