The History of Draughts in Cornwall

The History of Draughts in Cornwall – First Publication – Print on Demand.


The edition reviewed has 88 pages and is first edition by John Gillard. Publication date as 2014. Printed by Lulu.com on demand.

Extracted from The History of Draughts in Cornwall in Mr. Gillbards own words.

“I started playing the game back in 1952 at age 11 at a Christmas party, and then on to 16 with my father, who never allowed me to win a game, I finally beat him when I was 21!! At 16 I went to Bristol and played every dinner time in the Aircraft works at Filton and in the evenings once a week at the Bristol YMCA, with Tom Westlake, Mr. Russel, Percy May, David Hyde and others. I played in the Bristal Draughts League in a team from the YMCA and later the Aircraft Works team, plaqying in Pubs, Works Canteens, etc. At 19, I played for the Gloucestershire County team against Somerset, and when living in Bideford in 1967 played once for Devon v Cornwall at Plymouth. Now I play for Cornwall and have played for England on several occasions. Through the book you will find 3 Gillbard family players, all because my Great Grandfather (a farmer) played this game with his boys back in the 1800’s, and early 1900’s. The incentive to win was that the winners stayed indoors in the winter evenings and losers had to go out to feed and water the cattle and horses, a simple but effective way of getting them to learn the game!!”

I would like to remark beside many other fine achievements Mr. Gillbard was the English Amateur Champion in 1980. 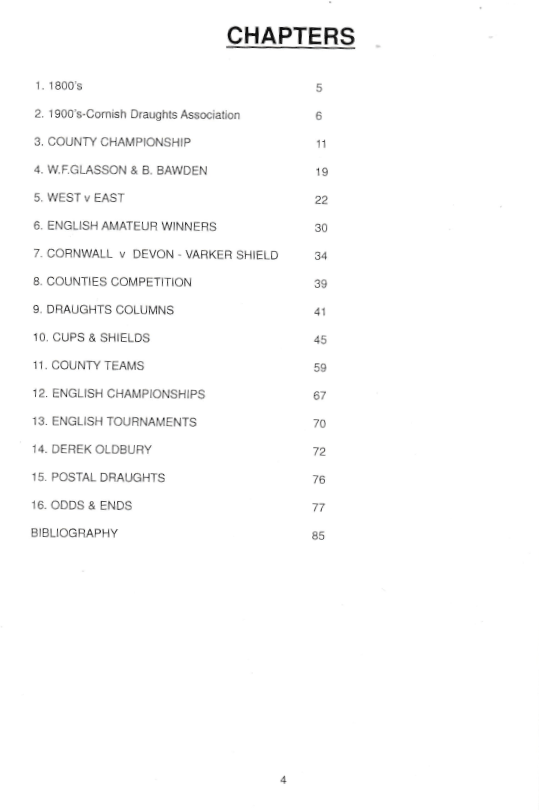 This is a book for all checkers and draughts lovers who would like to learn more about the rich history of draughts in Cornwall. If you are looking for a lot of games then its not for you as it has a lot of picture, list of champions, event and tournament organized, newspaper articles and a lot of trophies and other bits and pieces from 1800 until 2014. A small treasure for every lover of the history of the game.

If you are is looking for a high glossary print will be disappointed. It is a informative but at times with gaps as some of the players on picture cant be identified. What really impresses are the with draughts trophies. There is a wide variation of wonderful old trophies in the UK draughts scene which are unrivaled in beauty. Some of the pictures are small or low quality due to age or scan quality yet all is readable if you do put some effort or some magnification into it. Clearly the author did the best with the best with the limited space and material he had to work with. Mr. Gillbard clearly did put his heart blood into it.

A commercial print version can be ordered at Lulu

Books about Draughts or Checkers History