International Match. Complete Record of the Games Played between Players of Great Britain and the United States, Boston, March 14th to 25th, 1905.

August J. Heffner was one of the greatest players, analyst, problemist, coach and author of his time. As a player he was outshined by likes of James “Herd Laddie” Wyllie and C. F. Barker. As a problemist and analysist he is one of the greatest in the history of the game. His greatest laurels as a player were Champion of America in 1885 and being a member of the American International Team facing Great Britain in 1905 and 1927. As an author and analysist he was published in numerous magazines and books of the time and did author, to name just a few, a short lived American Checker Player magazine as well as work on the First and Second International match book America against Great Britain. He was as well one of the key figures in the introduction of the initial 3-move ballots.

There is no index in the front but an for the time unusual one in the back that shows what kind of games can be found on which page. 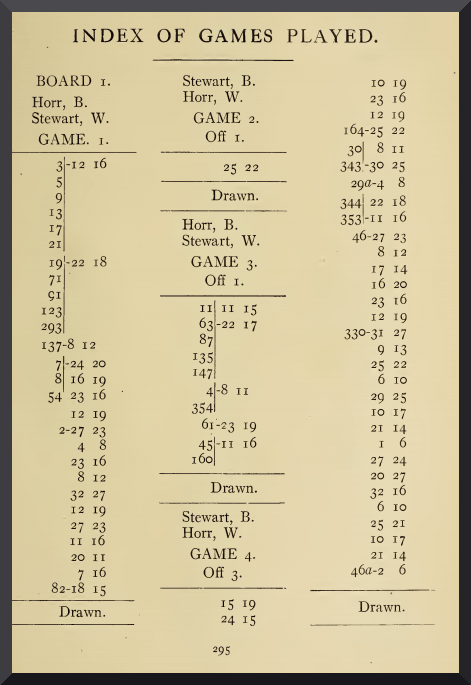 A wonderful book with all one can wish. Bio section, diagrams of the games, a great analysis by one of the games greatest analytic of the top players of the time. 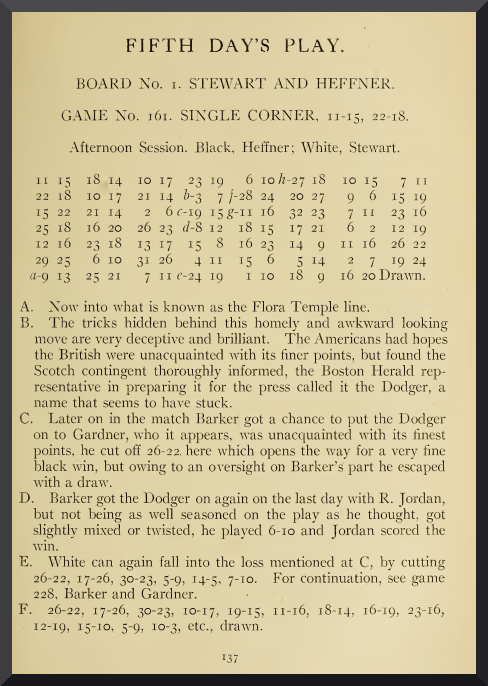 Every lover of our game that is remotely interested in good games. Those games are from the best players of their era. A star studded team on both sides.

The International Match is always the best players from the UK and later years Ireland against America facing off. This books has almost all of the superstars of the time facing off against their oversea counterparts. Where else you do have C. F. Barker, August Heffner, Alfred Jorden, Richard Jordan, Robert Stewart, James Ferrie and many other greats of the time facing playing each other representing their respective country? Definitely a must have book in every collectors or players library. The games are from the best players of the time and well worth the attention of the advanced player.

I did get a reprinted version off an Indian bookbinder and publishing house which did a splendid job and did actually even clean up the booklet and didn’t just copy and paste the online version of the PDF like some other publishing houses do. The binding is tight and the paper is of good quality so all in all a very good buy. The only downside is that the few pictures in the match book are not very sharp as they were not copied very well and the paper that works great for all the content is just not great for the pictures. But this had to be expected. 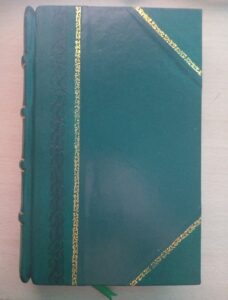 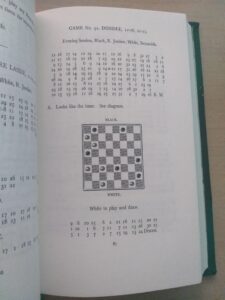 If you do like old books or reprints and give an commercial seller a go click the image right below.